Disneyland Paris celebrates its 30th anniversary this year. Opened as ‘EuroDisney’ in 1992, the park is the first for Disney in Europe. It forms part of a collection of amusement resorts began in 1955 with Disneyland in Anaheim, California and now encompassing parks in America, Europe and Asia. I recently had my first taste of the Disney experience when I visited the Paris resort with my family as a special treat for my four-year old grandson.

What struck me initially is probably what strikes most visitors on arrival – the sense of sanitised fantasy, of a perfect America (transposed from 3,000 miles away) that appeals to nostalgia and the fiction of endlessly happy childhoods. For Disneyland is but a modern incarnation of Utopia, one that makes the twenty-first century transition from the celluloid to the digital ideal and which I thought of as nothing more than a simulation, until reading Jean Baudrillard’s America  where he states that ‘Disneyland is there to conceal that it is the “real country”, all of “real” America, which is Disneyland’.  It appears that, for Baudrillard, the arid terrain of ‘Frontierland’ and the wedding-cake spires of the ‘Magic Castle’ are American reality or at least they appear so ‘when in fact all of Los Angeles and the America surrounding it is no longer real’.

Robert Hughes, in his review of America, is deeply sceptical of Baudrillard’s stance: ‘What Baudrillard calls a “vertigo of interpretation” is not vertigo at all, but complacency’. The concern Hughes has with Baudrillard’s depiction of Disneyland and America in general is that significant political events such as Watergate become ‘simulacra’, the deeds of Nixon and his followers having the same (or less?) cultural weight as Mickey and Minnie doing their tango down Main Avenue. If everything is viewed through this same lens of the ‘real no longer being real’, what anchor do we have to make discriminations or judgements? Are Srebrenica and Sleeping Beauty, for instance, really on a par (as Hughes claims they are for Baudrillard)?

Although Walt Disney was no man of the left, testifying to the House Committee on Un-American Activities in 1947 on being ‘besieged by left-wing ideologues’ (in the words of his biographer, Neal Gabler), there are potential challenges and inspiration from Disneyland for the socialists amongst us. Utopias are part of the left-wing imagination, whether it’s William Morris’s bucolic and class-free society in News from Nowhere or eyewitness accounts of the transformation of the early Soviet Union towards a supposedly industrial nirvana. In terms of the built environment itself, Le Courbusier’s ‘Ville Radieuse’ was a modernist blueprint of an ideal society – a geometric and futuristic counterweight to Disney’s nostalgic homesteads in Celebration, Florida.

Disney matters because his work operates at the intersection between fantasy and reality – look down one avenue, and what you see is a make-believe confection of 1900s small-town America, the evocation of his beloved Marceline, Missouri, with pastel-coloured shopfronts housing hardworking entrepreneurs. Look down another and there is the pageantry of a cartoon parade, Baudrillard’s reality/simulacrum paradox in the form of fibre glass. Disney was able to meld these aspects of fantasy and reality into a major contribution to American (and eventually international) popular culture. The power of this vision is demonstrated in the millions of visitors to Disneyland Paris and the other Disney amusement parks every year. It would probably be fair to say that socialism (in America and Europe, at least) does not have a pop-culture equivalent to Disney who can inspire and entertain people. There might be practical and philosophical barriers to this – there are probably not many hedge fund companies willing to bank-roll left-wing ventures on this scale and not many socialists who would want to do it in the first place. Disneyland is both a reflection and a vehicle for American capitalism under the guise of mass entertainment. One of the ironies for many American and European socialists is their desire to reach Disney’s vast audience without a sense of ‘selling out’ to the major cultural conglomerates. So far, they have been unable to create amusement and enjoyment with the same power for the democratic imagination as Disney has done for a century.

But when I look at my four-year old grandson and see the sheer delight on his face as he has yet another photograph with Pluto, I can’t help thinking people on the left have missed a trick. We can dismiss Disney’s vision as a capitalist ‘dream factory’ or a vehicle for American cultural domination. We can dress it up in Baudrillard’s notions of ‘the imaginary’, of debates on the ‘real’ and the ‘hyperreal’. But what Disney does embody is something aspirational and iconic, something people literally look up to when they see the Magic Castle spires. From a socialist perspective, the nearest thing I can think of is Vladimir Tatlin’s ‘Monument to the Third International’, a playful mix of helter-skelter ride and symbol of a new age and revolution. The regime Tatlin was celebrating ended in a brutal dictatorship but the sculpture still retains its power in allowing us to think beyond the prosaic when we view it. This was something Disney seemed to intuitively understand – any way of life or system of belief cannot survive on bread alone.

Hughes, R. (1990), Nothing if Not Critical: Selected Essays on Art and Artists, London: Collins Harvill. 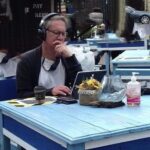 Neil Hopkins is a Senior Lecturer at the University of Bedfordshire and alongside Oli Belas is co-secretary of the PESGB Bedford branch. He has written two books, Citizenship and Democracy in Further and Adult Education and Democratic Socialism: New Perspectives in Policy and Practice. He has also written articles for a number of academic journals including the Journal of Philosophy of Education.