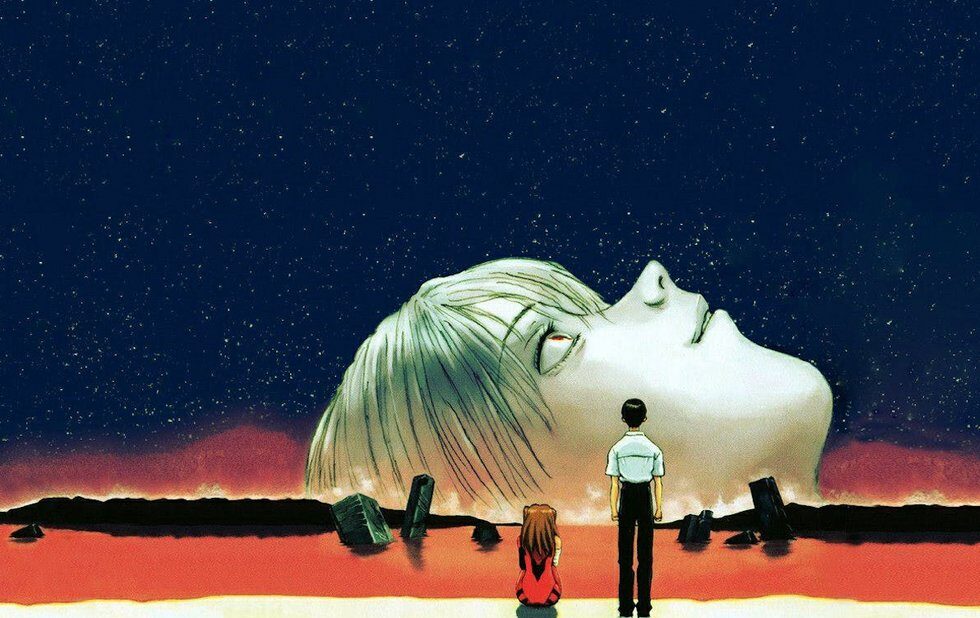 This blog post is available as a PDF here, and as an audiotrack below:

The 1995 Japanese anime series Neon Genesis Evangelion (NGE) takes place in a post-apocalyptic Tokyo where humanity has been pushed to near extinction. Before the events of the show, an experiment on a god-like extra-terrestrial named Adam incurs a nuclear event, known as the ‘Second Impact,’ which wipes out most of civilisation. As society attempts to rebuild itself from the debris, more god-like beasts (Angels) appear to threaten humanity and reclaim Adam. In retaliation, the ‘NERV’ taskforce simulates Angel biology to create Evas, giant exoskeletons that are strong enough to battle the Angels. There is a catch, however: a human must sync with the Eva to pilot it, and the only minds capable of achieving this synchronisation are children. The series depicts the story of three children coerced into piloting these semi-organic monsters to combat the Angels.1

NGE is a bleak depiction of the future, but an ultimately believable one if we are to treat the angels as metaphors for other annihilation events. A recent blog post engages with the idea that the show is a mirror to our own world, commenting on the ‘capitalist realism’ (Fisher, 2009) evident in NGE; it notes how Fisher’s claim that we are stuck in the mode of viewing the world through the totalising lens of capital haunts the laborious bureaucracy of the series.  In one episode ‘all of Japan has to harness an entire days’ worth of generated electricity to power a rifle that is humanity’s last stand against an Angel,’ but the questions of budget, process and logistics mean it is almost too late. We are reminded of Fisher’s observation that, in our current era, ‘no one is bored, everything is boring,’ as even the thrill of the apocalypse is bound by tedious red-tape. Another element of the tedium of capitalist realism lingers in the show, however, as what is truly bizarre about the dystopian future of NGE is that, despite everything, children (including the Eva pilots) still go to school. It seems even amidst the cyclical threat of annihilation, one must still go to school and get an education.

At a time when the triple threat of pandemic, climate crisis and global capitalism equate to an annihilation event of our own (one that Morton (2013) contends has already occurred), it seems we are entering NGE’s future. As always, the line between fiction and reality is hazy.  During the COVID-19 pandemic we have re-enacted NGE’s schooling, as the UK Government flagrantly opened schools in September and now, since their re-closure, chimes the chorus of ‘missed… learning’ and the need for ‘catch-up.’ Such calls reveal the pervasive obsession with schooling in the contemporary capitalist climate; Illich’s observation that our very ‘imagination is “schooled”’ (1971, 1) persists throughout the twenty-first century and into the dystopian futures of anime. It is as if we believe, just like the population of NGE, that sending children to school is a universal imperative, a natural aspect of existence. Schooling and being seem intertwined, at least in this late-capitalist epoch that NGE mirrors.

NGE’s depiction of children reinforces such ‘schooling’ of the imagination on the individual level also: the young pilot Asuka has clearly been educated to believe that piloting the Eva is an honour and privilege. She believes that if she is not a pilot, she is nothing. Another pilot, Shinji, has clearly internalised disciplinary power (Foucault, 1991) and punishes himself for his reluctance to fight the Angels. We regularly hear his internal monologue (and even spend some episodes in a representation of his psyche), and it becomes clear he has learnt to believe he should feel shame if he does not battle the Angels. Perhaps the children’s ability to be schooled as such and synchronise with the Evas symbolises that it is they who are malleable to the whims of the state, whilst creating a very specific view of the role of children in this post-apocalyptic society.

The intersection between monotony and tragedy in the portrayal of the ‘Children’ are of course interesting from another philosophical perspective. The manner in which children are educated to believe they are the only group able to ‘save the earth’ is one that frames the being of the child as being-towards-redemption, thus justifying their expendability. Our current post-Enlightenment view of the child, the delicate thing that needs nurture and time to grow, seems to be cast aside for the NGE future. And yet, are the children of NGE such different beings from that which education shapes today? The looming apocalypse of climate change, alongside a visibly growing grip of far-right ideology, has spelled a series of calls for education to be utilised to combat these terrifying futures. Even before the triple threat of our times, children have long been reduced to results and performance, becoming yet another expendable unit.

We must ask how different this is from NGE: do we not try to shape children as beings who must save the future for us? Too often, we hear the calls to educate ourselves out of the apocalypse via the children – we must teach children to think more critically, to be more politically aware, to not repeat our mistakes. But this merely absolves us of our sins, and so too does it repeat the troubling reliance on children from NGE. Children may well be the future, but it is not their responsibility to save it, just as it was not the responsibility of the Eva pilots. We must face up to our own Angels, rather than prepare to fight them tomorrow.

1 There are numerous other aspects of interest to the educationalist in this series.  There is an overtly Oedipal strand, pontifications on human instrumentality, an obsession with beginnings (neon genesis), and many caveats to the reductive description I have given here.  One must watch the show to truly grapple with its bizarre and complex narrative surrounding these children.

Morton, T.  (2013).  Hyperobjects: Philosophy and Ecology After the End of the World. Minneapolis: University of Minnesota Press

Nicholas Stock is a postgraduate researcher in philosophy of education at University of Birmingham and a lecturer of English Literature in a sixth form college. He is interested in ironic approaches to education, particularly those that embrace literature, media or poststructuralism, and in radical educational ontologies.